The coast of Somerset offers tremendous variety. Much of the coast of North Somerset is on the Somerset Levels and hence flat, but mixed in with some large hills and headlands, such as Brean Down and Middle Hope that extend from the Quantock Hills. It is dominated by numerous rivers and drainage channels. Heading further south the coast soon becomes far more rugged as it crosses first the Quantock Hills and then the hills of Exmoor, one of Britain's most beautiful and least visited National Parks. 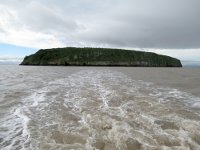